This week’s theme is Number fun.

We have lots of practical ideas for having fun with Numbers. They are fun to spot when you are out an about. It is surprising how many numbers you can find!

Take part in a Number Hunt. Hide the numbers on post its/ paper around the house/ garden. When you find them, order them, and then make sets of each amount using everyday objects.

Go out on a number hunt. Have a list of numbers It could be 1-10 or bigger numbers, 2 digit or 3 digit and tick of or mark the numbers as you see they. They could be on houses, bus stops, buses, car registration plates. It’s fun to stop and identify different ones. You could count how many different numbers are on your road or near where you live.

Make a pot number match see photo -draw around plastic pots on a sheet of card or paper. Within these shapes draw a number of dots. On the bottom of the pots write the numbers which correspond with the numbers of dots. Then you can match the pot to the dots.

Playdough straws- Push some straws/ skewers/  into a slab of playdough and then put pasta onto the straws counting the amounts or add pasta to a given amount. 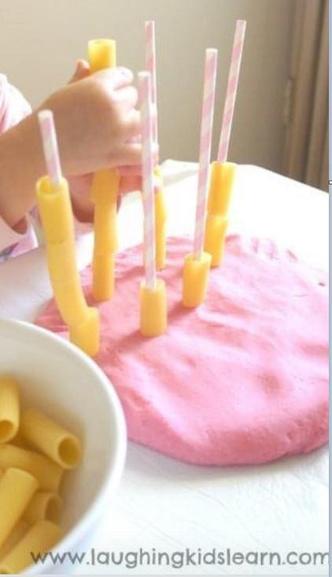 Match the pegs to the numbers-

Draw around your hands and create finger number bonds 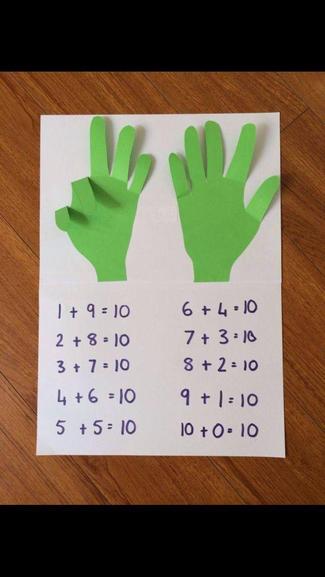 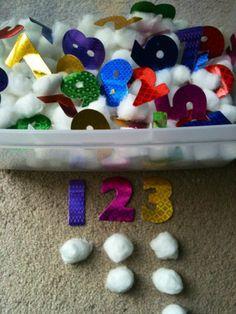 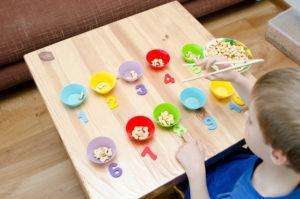 Race to fill the cup - roll a dice and put that number of items in the cup, taking in turns. Who can fill the cup first? 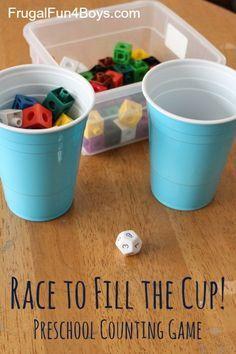 Peg numbers on the washing line - have number cards - can the children find certain numbers to peg on the line? Can they peg them in order? Can they peg even and odd numbers?

Number playdough - can the children make numbers with playdough? Can they make a certain number of playdough blobs and stick them onto number cards?

Peg the correct number of pegs onto number cards

Use cotton buds to trace numbers and practice number formation

Roll a dice and collect this number of Lego pieces to build a tower. Take turns and see who can build the biggest tower!

Write numbers in cup-cake cases. Can the children fill them with the correct number of items, e.g. pom-poms, cheerios?

Practical games in the garden - see how many balls/bean bags etc. they can throw into a tub - have a competition - who has the most?

Fishing game- make some fish with number sums on the back to answer or just numbers to order- either fish using a magnet and split pins or i guess in a box with a net..or in a bag! nice picture of home made ones on HERE

Number stickers- Write a number on a piece of paper. Ask what the number is. Child then to cover the outline of the number in stickers.

There are some good, interactive number games here:

Unfortunately not the ones with chocolate chips.

Some cookies are necessary in order to make this website function correctly. These are set by default and whilst you can block or delete them by changing your browser settings, some functionality such as being able to log in to the website will not work if you do this. The necessary cookies set on this website are as follows:

Cookies that are not necessary to make the website work, but which enable additional functionality, can also be set. By default these cookies are disabled, but you can choose to enable them below: